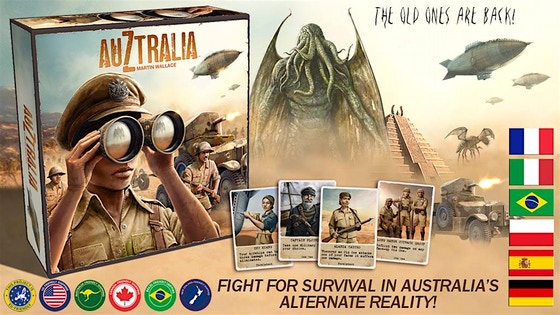 Firstly, just to note that the player boards - as @peteyandycreek noticed -  have been changed since the prototype. The effectiveness chart in the Barracks area has been removed after player feedback.  I think it looks much nicer. Don't worry though - the information is still available, albeit on the back of the rule book and also on the item that you added today as a result of smashing the first Quest. This is what the player board looks like now.

Glad to see that you knocked the first two Daily Quests out of the park! Here’s what has been added so far:

It is designed to be handed around the table as needed, or to assist newer players who don’t want to look through the rule book for the key points.   There has been some comments about the proposed size of the player aid.  It is currently setup as A4 but it does need to be tidied up,  so I will see if it can be made smaller.

Quest 2 Successfully added eight Old One Tiles, bringing the total count up to 43.

As a result of this Quest, the membership of the AuZtralia Facebook group grew to 290 today, almost double. Everyone is welcome to join the discussions about the game.

How do the Exploding Temples work?  Briefly, when an Exploding Temple is revealed, you place the three new tiles of its kind (Mi-Go or Zombie) on the Temple. They then immediately move two hexes away from their Temple in a direction as determined by the compass.  The Temples ‘explode’ once only, when revealed and afterwards act as other Temples do i.e. they may spawn Level 3 creatures.

As a direct response to Rahdo's concerns about the 2 player game, Martin has got his thinking boots on and has already come up with a dozen variants to ‘enliven’ the 2-player game. If you have access to a prototype and would like to help us test these – please message me so I can share the details with you in private. Thanks to Ike, Jasmine, and Kolby for already offering to help with this.

If you have a prototype copy that's not being used much, please offer to share it. There are volunteers on the Facebook group wanting to use it!  We also have other 'enhancements' in the pipeline that will affect the 2 player game quite a bit!

Rahdo says he had a blast playing solo and that it is lightening quick. If you are a solo gamer, we have some great additions coming for you. On the same note, one of our eminent testers, Stephen Croft in Melbourne, has been playing solo games for a few weeks and has kindly written detailed session reports. The first is posted on the geek here.

Talking of stress testing, my elderly cat Noodle has been living in the box base for about a week and it hasn’t busted its corners yet!

Finally, I just saw this on BGG a moment ago!

Thank you all for being here,